OKLAHOMA CITY – One of the most exciting moments in recent SWOSU Lady Bulldog basketball memory has become an award-winning moment for ‘Voice of the Bulldogs’ John Liddle. Liddle’s call of the Great American Conference Tournament Championship has been selected as the Play-by Play Outstanding Achievement Award by the Oklahoma Association of Broadcasters (OAB).

Trailing by 13 with 15:11 to play, the Lady Bulldogs rallied to defeat Harding, the No. 2-ranked team in NCAA Division II at the time, to earn a second consecutive bid to the NCAA Division II Tournament. SWOSU finished the game on a 12-2 run, highlighted by the go-ahead basket from Michelle Fisher and a charge drawn by Jaimee Cohen before Kylie Boggess hit two game-clinching free throws with nine seconds left on the clock.

“First, it takes a great moment to have an exciting call and I’ve got to give the SWOSU Women’s Basketball team the credit for providing the material,” Liddle said. “It was a stunning, epic win and Liz and I were just calling it the best we could. Liz and I make a great team and I’m so glad she’s a part of this award as well!”

Liddle was joined on the call by former Lady Bulldog Liz Lay, who has been a color analyst for SWOSU Basketball games the past two seasons. Liddle was also selected for the Outstanding Sportscast award for ‘Afternoon Sports with John Liddle,’ giving him nine career honors from the OAB, including four for play-by-play, four for best commercial and one for best sportscast since joining Wright Wradio as the ‘Voice of the Bulldogs’ in August of 2008.

“It sounds cliché to say, but I don’t do the job for the awards,” Liddle said. “I do play-by-play because I absolutely love it. But, when you are honored for something you love to do, it just helps spur you on to keep improving.”

Liddle’s home station and SWOSU Athletics sponsor, KWEY in Weatherford, also joined in the award winning as they were awarded the 2014 Community Service Award for the Radio Division. All of those honored will be presented their awards at the annual OAB Awards Banquet on Friday, March 27 at the Skirvin Hotel in Oklahoma City. 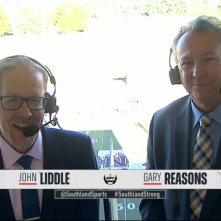